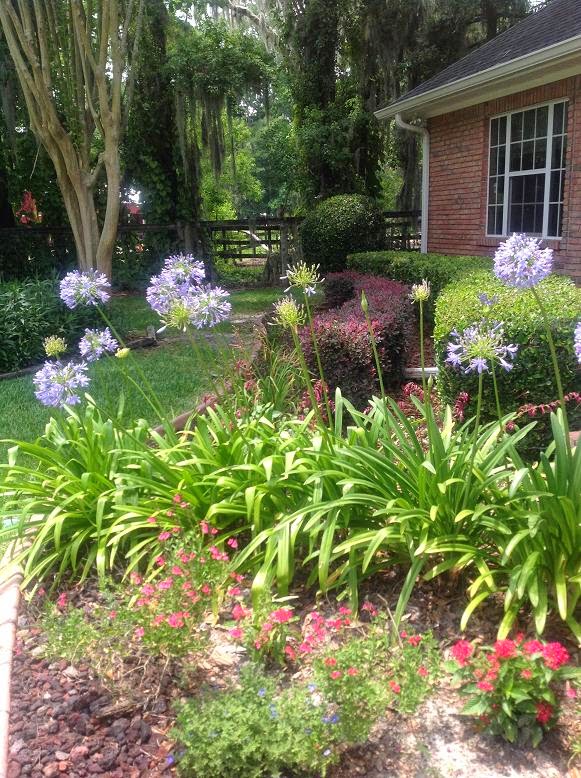 On a beautiful June afternoon, I visited with Mary Anne and Charlie Williams in their lovely home. It was such a pleasure to sit with this couple at their kitchen table, which looks out on their gardens, and listen to them tell me about finding the perfect place to build their home sixteen years ago and how they started designing their gardens. They knew they wanted a wooded lot with lots of trees, grass, plants and flowers. And believe me they found the perfect place to make their dreams come true!
You enter their property by driving down a long driveway, and along the driveway, you will see the large trees and beautiful flowers Mary Anne has planted. Recently they installed street lights along the driveway for night driving. Sometimes this summer I'm going back for a night drive down the driveway. Ha! As you arrive at the front of the house, you will find a large fountain enclosed in a circle using bricks, and inside the circle around the fountain, Mary Anne has planted blue Plumbago. The beds at the front door are filled with Saliva Gregg ii and Blue Daze. What a magnificent welcoming sight! 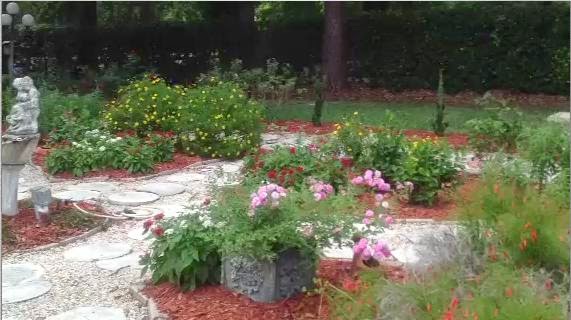 On the back of the house is a screened porch, that leads to the English Knot Garden. A Knot Garden is a formal design in a square frame using hedges, plants, annuals, rose bushes, herbs and focal points in each area. Squares and circles seem to be the most popular designs that are now used in a Knot Garden. Walkways of gravel, flagstone, bricks or other materials are weaved among the knots. The Williams put down 85 pallets of grass on their property and then began work developing the gardens. Sixteen years later their home and gardens are spectacular!
As you enter the knot garden you will see mint, parsley, oregano, two kinds of chives, and basil. Along the west side of the garden is a row of rosemary bushes and spirea bushes. On the opposite side of the garden are three fully grown Holly Stevens Trees, which were planted to give privacy to the garden and to separate it from the rest of the property. Mary Anne has included 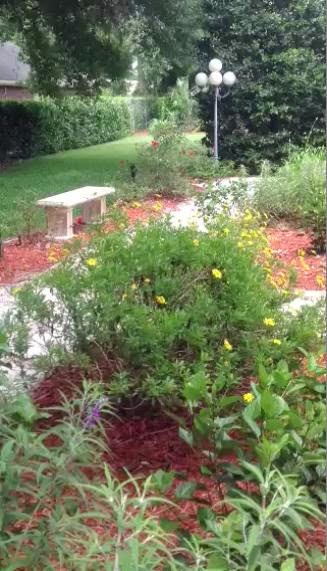 Mexican Sage, bush daisies, hibiscus, Florabunda roses, and Firecracker plants in the back half of the garden. In the center of the knot garden is an old fountain surrounded by dwarf Marigolds and multicolored Pinatas. Agapanthas (Lilies of the Nile) surround two sides of the garden and were just beautiful when I was there. The back side of the garden has Knockout Roses and "7 Sister Roses" which flank two stone benches. The walkways wind through the different knots of the garden allowing you to just walk around enjoying all the loveliness. Charlie and Mary Anne have created a haven for humans and birds (and squirrels). 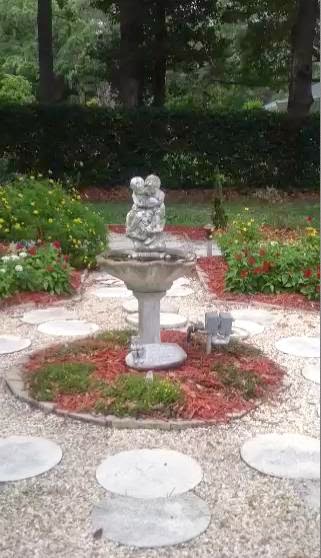 The day I was there I was just amazed at the beautiful birds. As we sat at the kitchen table talking, the birds and butterflies were all a flutter feeding on the flowers and at the bird feeders. Mary Anne did tell me how much the squirrels enjoy her garden, too, much to her distress. She has shared some of her bird pictures with me and I will be featuring them on Facebook. 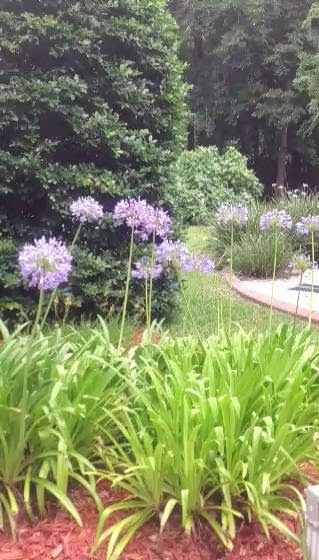 The garden is rather sad in the Winter according to Mary Anne, but I just can't see that. She plants petunias in the winter, where the pinatas are in the summer, for color. She does try to use perennial plants to keep the cost of replanting in line. But each year she uses some annuals. This property has to be beautiful in all seasons!
You can tell Mary Anne and Charlie love their home, and have worked hard to make it a special place for their family and the wildlife that live there. Mary Ann told me that," she works hard to keep her little piece of earth something the Good Lord would like looking down upon". I would say she and Charlie have accomplished this big time! Thanks for the visit.
Mary Anne is a member of the Dogwood Circle at Mandarin Garden Club and Charlie is a retired dentist who enjoys woodworking.
Article written by Mandarin Garden Club member, Betty Waldrep
Posted by Mandarin Garden Club at 6:03 PM No comments:

Diane Frisco, from Dogwood Circle, is raising Monarch Butterflies.  She had a question about some of the crystallis turning black.  Mary Howe, also from Dogwood Circle, shared a link about the signs and causes of "Black Death".  This is a link that should be helpful to all Gardeners:  http://www.Insects.About.com.

Thanks to Diane and Mary for sharing with us. We are all waiting and watching for the butterflies to return!
Posted by Mandarin Garden Club at 7:42 PM No comments:

The North Florida Bonsai Club has been conducting their club meetings at the Mandarin Garden Club on the second Monday each month for several years.  Thursday, June 19, 2014 from 7:00-10:00pm they will present a special program featuring David Easterbrook at the Mandarin Garden Club.  You will see a demonstration during this session from a master and his bio is below.  This program is open to the public and all are welcome to attend.  This style of gardening is quite an art.

David has been studying and creating bonsai for over 40 years.  He began studying bonsai with Jerry Stowell and then apprenticed for one year in Japan at Kidoen with Isao Shinkai.  Afterwards, he started his own bonsai nursery, which he still runs today.  In 1982, he became Curator of the Montreal Botanical Garden’s bonsai collection and recently retired in 2011.  He has always pursued an active teaching career in a variety of locations including the Montréal Botanical Garden’s School of Horticulture, in the eastern U.S. and abroad.  Further, he has served as judge of several national and international bonsai competitions.

He is a founder and past president of the Montreal Bonsai and Penjing Society.  It is now one of the largest and most active bonsai societies in North America having over 400 active members.  As well as monthly meetings, it offers four levels of bonsai classes, three study groups and several workshops.  In 1988, David chaired the ABS Annual Convention in Montreal.  Also, he served on the ABS Board from 2005 to 2008.

David has quite an eclectic collection of more than 900 bonsai.  His trees have been widely exhibited in both Canada and the U.S., including U.S. National Bonsai Exhibitions, and they have appeared on the covers of International Bonsai Magazine.  During his long career he has trained and cultivated almost every species grown as bonsai.  As a young man, he favored fruiting and ﬂowering trees.  Subsequently he specialized in group and forest plantings and today is well known for his collection of conifers: junipers, pines and especially wild collected larch trees.

David now dedicates much of his time to reﬁning bonsai (with the help of over a dozen of his assistants) and studying the art of bonsai presentation.
Posted by Mandarin Garden Club at 3:26 PM No comments:

The Men’s Garden Club wants to provide Aloe Vera plants as a topical treatment to cancer patients to help relieve the effects from radiation burns. They are working with the Jacksonville Zoo who will provide a protected growing space.

If you have any plants that you would like to donate, please drop-off the plants to the Mandarin Garden Club nursery on the table in front of the mailbox at 2892 Loretto Road, Jacksonville, FL 32223.

The Bumblebee Circle was awarded a plaque of appreciation for their wonderful efforts in helping our sister organization, Mandarin Community Club, at the Billard Park.  These young volunteers helped with Billard Park's ground and butterfly garden in order to get it ready the 46th annual Mandarin Art Festival (held Easter weekend 2014) as well as prepare the grounds for the new unveiling of the Billard Commemorative Park sign.  Thank you for all of your hard work; recognition was well-deserved!
Posted by Mandarin Garden Club at 5:17 PM No comments: