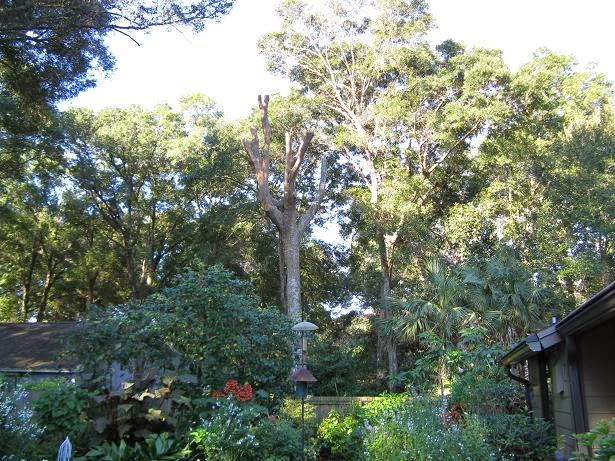 One of our members, Tess Hart Ross, Dogwood Circle, has a unique experience to share with us.

July 4th came early at our house this year. On June 3rd during a driving rainstorm lightning struck an 85' laurel oak tree about 20' from our house. We were not home at the time but various neighbors have described the event in vivid detail. Most included finding religion from the vantage point of under their kitchen table.

We came home to find the A/C, the computer, our phone recorder and four remotes, and one TV totally fried. And because of the proximity of the underground telephone and TV cables to the roots of the tree, all their connections to the house were toast as well.

Living in Mandarin under a canopy of live oaks, laurel oaks, water oaks, black cherry trees, longleaf pine, and hickories such occurrences don't come as a surprise. We don't even bother to call our insurance agent anymore as he disowned us years ago after the first strike.

We set about making contact with all the service folks needed to get back up and running, with a special trip to purchase heavy duty surge protectors for all the new electronics. We've got it down to a fine science.

They say lightning does not strike the same place twice. NOT TRUE! Three weeks later in the middle of another downpour, the wounded oak took another hit. The same underground cables were fried but nothing else in the house was damaged. In three days every leaf on the tree was brown. It was a goner.

We lived with its standing corpse for a couple months hoping for signs of life and attracting all kinds of drive-by tree removal companies, full of advice. We were too fond of our giant and were just not ready to see it go. It was safely in a far corner of the yard so falling limbs were not an immediate threat to pedestrians but we needed a unique solution to the tree's demise.  (Click below to read more)

Being a dirt-loving tree-hugger I started researching options and came across an article on the Smithsonian website that described a similar situation. One of the large trees in the garden of the National Museum of Natural History had died of root girdling. The staff arborist realized its potential as a striking structural element but also as an “Urban Bird Habitat” or “snag”. I was on to something. I found similar articles on the Audubon website, the U.S. Forest Service website, the National Wildlife Association website, and the strangely named “Cavity Conservation Initiative” website. Pages and pages went into detail about turning the rotting trunk and branches into spaces for nests, nurseries, storage, foraging, roosting, and perching for several varieties of woodpeckers as well as hawks, eagles, Carolina chickadees, tufted titmice, nuthatches, bluebirds, and all kinds of owls, small mammals, and other city wildlife. I was hooked!

Defining a snag, the dead tree's trunk is at least a foot in diameter, and 15' tall, but can also be a large portion of a living tree. The top third of the tree and half the remaining side-branches are removed. This facilitates the inside-out decay process best for attracting cavity-nesting birds and providing perches for hawks, eagles, and owls. 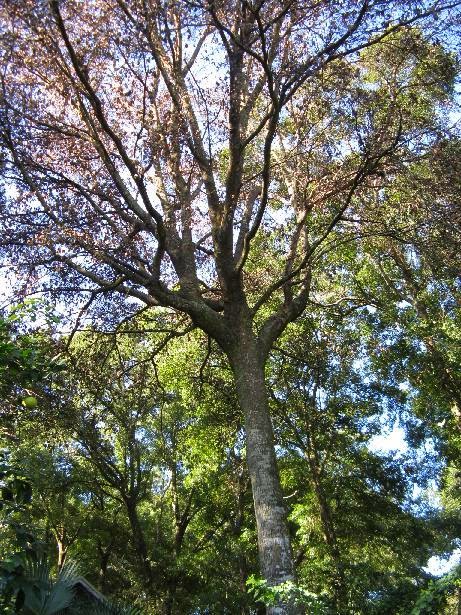 The primary cavity-nesters, sapsuckers and woodpeckers, excavate for their nesting season and then move on. The secondary cavity-nesters move into vacated cavities and abandoned nests. All of them consume large quantities of potentially damaging insects each year, acting as a natural biological control.

In addition, the woodpeckers and sapsuckers use dead branches for “drumming”, their form of communication. Squirrels and small mammals use dead limbs as foraging sites, to store food supplies, and for denning. Bats use loose bark and hollow trees for roosting. Dead limbs provide birds with perches for hunting, territorial defense, and courtship. Frogs, toads, geckos, and skinks find safety behind loose bark.

Eventually fungi enter dead trees, helping with the natural decay which returns vital nutrients back into the surrounding soil.

Alright! I was ready for the next step of finding a tree removal company that did not think I was crazy and had the patience to trim the tree according to my specifications. Enter the tree service I had used in the past for tree trimming and had kept an eye on the decline of said tree. I explained in detail what I visualized the final outcome to be and altho' hesitant at first he soon came up with a plan of action. He and four assistants showed up one morning planning to make it an all-day endeavor.

The main man with the chain saw worked his magic and with several shouting conferences with me on the sidelines, we created a wildlife tree work of art. Talk about having the patience of a saint! He even provided a 3' perch for our neighborhood hawk who just happened to stop by in a neighboring tree to watch the progress. I've enclosed progressive photos of the project. Some might think the finished product an eyesore but beauty is in the eye of the bird utilizing the tree. I've seen three varieties of woodpeckers working away on the snag. Squirrels use it as an everyday extension of their gymnastic feats. And I'm holding my breath for the day I look up and find a bald eagle building a nest in the crotch of the major remaining limbs. Of course all snags need to be regularly assessed and managed for risk to people and property.

We've fielded a lot of questions and inquiries from neighbors and passers-by and I'll eventually purchase a “snag interpretive panel” sold by the Smithsonian to hang on the tree as explanation for it's existence. (http://smithsoniangardens.files.wordpress.com/2014/02/sag.pdf) 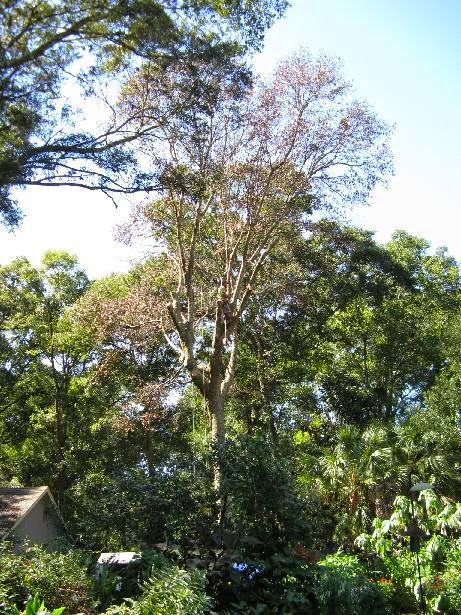 We harbor a strange kind of pride as we keep a daily eye on it but hope Mother Nature does not provide us with the opportunities to create more snags any time soon.

Tess has kindly offered to answer any of your questions about the company she used and snags – just contact her via email.  She’s in our Directory in the Dogwood Circle.
Posted by Mandarin Garden Club at 9:13 AM